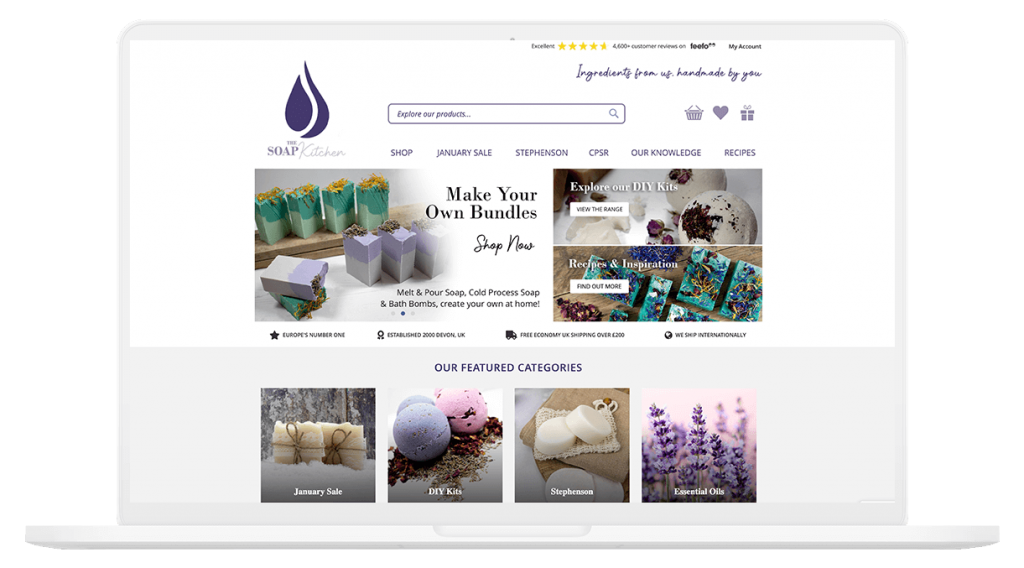 The Soap Kitchen is one of the UK leading handmade soap manufacturers and ingredients stockists. Their expertise and impressive product range combine to offer the best value to their clients.

Soap Kitchen has been a client of ours for many years. In 2018, they were using our desktop software, however, they recognised that browsers were changing the way the site was being viewed, using mobiles & tablets instead.

They opted to use a cloud platform and due to their requirements of a mobile-friendly site and their ambition of scaling, we recommended Magento as the right platform. Which we felt would help them achieve their commercial goals, as well as remove some of their technical challenges.

We designed, developed and launched the Magento 1 website in 2018, during that year they saw major improvements in user experience which increased their conversation rate by 40%.

Website speed is a key search engine ranking factor, knowing that Magento 1 was no longer a supported platform and that it would become obsolete, hampering their scaling ambitions and overall website performance. They opted to take the opportunity to migrate to Magento 2 – as this was the right thing to do for their commercial goals.

Multi-site configuring for the EU store, including full testing of the core functionality and the extensions.

We integrated Brightpearl which connected their sales orders, fulfilment, inventory management, accounting, reporting and planning and warehouse management. Which removed long manual processes, so they could spend more time on the business.

We migrated over 6,000 products from Magento 1 to the new Magento 2 site.

Soap Kitchen requested a frictionless checkout experience. We added one step checkout which made it easier for their customers to check out, removing the need for customers to move back and forth from different pages when filling in their information.