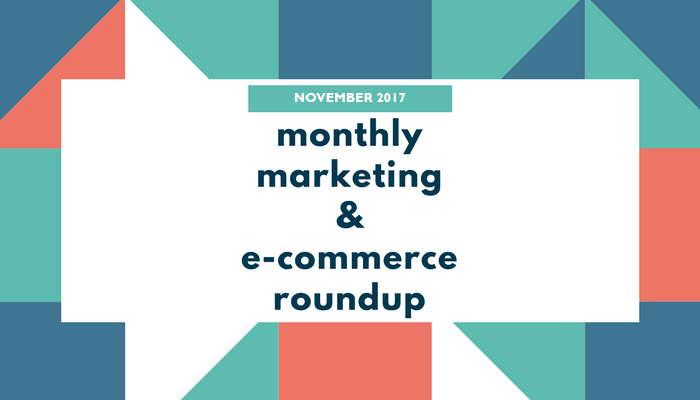 The countdown to Christmas is well under way! Therefore, it’s understandably been a busy and rather hectic month in the world of marketing and e-commerce. In this round-up, we try to clarify and update you on a few things you may have missed in November. This month we cover cart abandonment, Twitter doubles its character limit and Black Friday trends.

It’s official people. The change has come. Twitter announced in November that the limit would officially be extended from 140 to 280. We previously mentioned that Twitter were testing this new limit out on a number of users worldwide, and it seems to haven proven popular and successful.

And the proof to their success? Engagement! Twitter has seen a drop in users and a plateau of engagement on the platform over the last 12 months. This recent and significant change is hoped will make the social feed fresh again.

To streamline their Marketplace option, Facebook have recently integrated PayPal as a peer-to-peer payment option in Messenger. Their more recent announcement enables users to send invoices through Messenger, for items they’ve purchased.

This new feature will help streamline the process of payment through the app. An app that is growing fast globally with its listings:

Search volume in Facebook’s peer-to-peer classifieds directory that launched a year ago has grown 3X globally since the start of 2017, with 18 million listings being added in the US alone in May. There’s also been 77% growth in unique conversations between buyers and sellers over the first half of this year.

This integration will be significant for Facebook. It will help  transform perceptions of Messenger from just being a chat app, to a serious business tool. With these new features, alongside their recent dedicated section for vehicles, Facebook Marketplace will be one to watch in the future of e-commerce.

Early stats suggest that Black Friday spending has increased compared to last year, with 18% up YOY in the US, and 12% for the UK.

SaleCycle have produced their Remarketing Quarterly Report, and the stats show an increase in cart abandonment. Covering five sectors from July to September, global cart abandonment rose by 1.5% to 78.4% from the previous quarter. The fashion industry converts the most customers with 68.1%, with the finance sector converting the least at a much higher rate of 83.2%.

And the reason behind these cart abandonment stats? Well, that’s the million dollar question in e-commerce isn’t it? But although it’s almost impossible to prevent this rising shopping habit, there are other ways you can encourage consumers to complete a purchase or draw them back to your site. 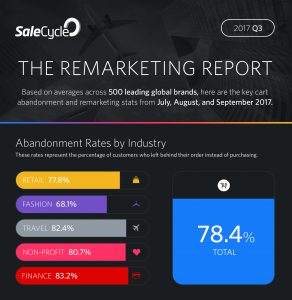 As one of the most popular sales event in the calendar, Black Friday was most likely at the forefront of your mind in November? Online business or a bargain hunter, it seems that this American discount day is becoming a custom for us Brits. Not so much on the streets anymore, but online.

Gone are the days of the mad rush of bargain hunters squeezing through shop doors to get their hands on exclusive offers. Consumer habits and behaviours are showing a conversion on purchases being made online to avoid the crowds. Stores like Argos, saw an increase of purchases made the night before Black Friday. And John Lewis claimed to have their busiest hour of online sales in its history.

Black Friday sales seemed to have lengthened and become more of a pre-season Christmas sale. Seems like with revenue and traffic increasing across this sales period, this is one event you should prepare for. This could be through some digital marketing or adding some simple edits to your product pages, as long as your business can embed itself in the market, there’s real profit to be had before the Christmas sales begin.

Most shoppers (74%) do their pre-shopping research via a retailer’s website… 43% use email, and 36% will check out a retailer’s mobile app

The rise of mobile device spending on Black Friday

The increase in Black Friday spending is increasing year on year. And not just in America, where it all started. France saw an increase in online traffic of 250%, with Spain seeing a colossal 700% increase in revenue.

AppInstitutes animated data visualisation allows us to see what 24 hours of intense shopping looks like. Comparing Desktop, Mobile and Tablet, the coloured balls represent each device and what sector money has been spent in.

It’s clear from their visualisation that mobile spending is on the rise. Smartphone adoption has soared from 52% of adults using them to 85% today. And it’s not just a market for millennials. 71% of 55 to 75-year-olds in the UK now use smartphones. That’s a significant number of mobile users that probably shouldn’t be ignored, especially with the increasing trend of mobile spending. With this generation owning half of all the UK wealth, they’re a huge potential audience to target and market to.

If you need help with your digital marketing, then please get in contact with the sales team at sales@sellerdeck.co.uk